Recording engineer and inventor George Massenburg, an adjunct professor of recording arts and sciences at McGill, the largest university-based school for professional music training and music research in Canada, sees loudness normalization as the next major trend to hit the music industry. He points out that Apple iTunes, for example, already features controls for normalizing the sound across one’s library of songs (“Sound Check”). “Normalization for music is spreading, and we want to educate students to take advantage of this trend the best way they can,” he says. “We want them to be able to make good mixes so they can work going forward.”

The RTW TM3 is one way sound recording at The Schulich School of Music is helping his students prepare for this future. With its easy-to-use 4.3-inch touchscreen and large number of graphical and numerical instruments showing single-channel and summing-loudness bargraphs, PPM, true peak, SPL, loudness range (LRA), dialnorm and correlation, the TM3, part of RTW’s TouchMonitor line of audio meters, is a perfect tool for students learning how to measure loudness control for the first time. Its flexible user interface enables the selection of up to 10 presets with the swipe of a finger, allowing students to focus energy on training their ears for loudness differences.

“Another benefit of having the TM3 readily accessible is when the students are working with multiple projects at once,” explains Massenburg. “To give the students references when they’re learning how to mix, we’ll have them do a new mix but refer to another piece of work. It may not even be the same song—it may be something else, but to reference that on an equal playing field—meaning equal loudness—they’ve got to measure the loudness of that external file. So it’s very useful to have the meter right there. It’s not software. It doesn’t come and go with the project. It’s a part of the setup.”

That setup is located in the Schulich School’s Studio A, where the RTW TM3 is part of a range of solutions the students use to conduct mixes. These include Euphonix MC mixers, Merging Technologies Pyramix, Avid Pro Tools, ATC, Genelec and JBL loudspeakers and monitoring systems, among others.

“The TM3 helps the students adjust the loudness of a mix until it’s roughly in the ballpark of their reference mix,” adds Massenburg. “Then they can move ahead with making better mixing decisions. We find that elements that are punchier, such as a snappier snare or kick drum, really don’t affect the loudness as much as a constant, dense mid-to-upper frequency range, so students don’t have to squash their mixes to make them stand out. It leads to more dynamic mixes. It’s a tool that we think is going to be more and more important to students and practitioners [as loudness normalization becomes more prevalent in the music industry].”

Massenburg says his students find it easy to work with the TM3. “It’s very clear. We have it pre-set so that 85dB SPL is the target playback level, and -24dBFS is the target recording level. Since its relative between their work and an outside work, we can just kind of stay in that one setup. It’s nice that it’s flexible, but we don’t want it to change too much, so everyone is already up to speed on how it is set up.”

For Massenburg, much of his work at the Schulich School ultimately comes down to training students to be excellent critical listeners. “We train our students to listen hard and to pay attention to detail,” he says. “The better they’re trained in critical listening and evaluation skills, the better they’re able to deal with the more varied situations they could encounter out in the workplace.”

This training is obviously a resounding success, as graduates of the Schulich School have gone on to successful, high-profile careers in many different fields. One former student, for example, is the chief engineer of Symphony Hall in Boston. Another handles sound for some of the most popular musical shows in Las Vegas, including Cirque du Soleil’s Beatles LOVE presentation.

“We give our students the skills that they can take anywhere,” says Massenburg. “They can continue with music production, work for a classical operation, go into television production, or go further with their research. We provide them the skills to be able to say, ‘Sure, I can do that.’ [Loudness and the RTW TM3 is part of that.]”

Apple and iTunes are trademarks of Apple Inc., registered in the U.S. and other countries.

About RTW
RTW, based in Cologne (Germany), has nearly 50 years of experience in designing, producing, and marketing advanced recording-studio equipment, leading and innovating the market for high quality audio metering and monitoring tools. RTW operates a worldwide distribution and service network. For more information on RTW, visit www.rtw.com, www.facebook.com/rtw.de or call +49 221 709130. 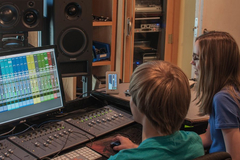