CBC initially planned to purchase approximately 80 TouchMonitor TM3 units, but after further studying its requirements, increased that number to a total of 100 units. According to Jürgen Mölders, head of post production at CBC, who manages nearly 70 post-production suites, when it came to purchasing new loudness meters, CBC, already a longtime user of RTW equipment, felt RTW was the obvious choice. “When we tested a prototype version of the TM3, we were quite taken by its simple and intuitive operation,” he says. “We typically use the TM3 units in editing suites. As the monitoring device is a separate hardware unit, the main screen is reserved for the primary edit applications at any time.”

Since the TM3 installation at CBC spans several stages, Mölders insisted on having the first shipment delivered late in May. “Internally, we already transitioned our production to the new loudness-metering systems in June,” he explains. “This means that our editing suites already comply with EBU R128, but for the time being, we’ve adapted the levels in Final Cut Pro to our previous standards, which are still applicable. Thus, we were well prepared for when German regulators began to enforce loudness regulations for all major TV stations at the IFA in Berlin on August 31.”

Jochen Wellnitz, senior sound engineer at CBC, says he and his team are very happy with the experience they’ve had during their first few weeks with the TouchMonitor TM3. “Operating the device locally using the touch screen is simple and quick,” he says. “When browsing presets, the graphical preview feature is truly handy.”

According to Mölders, in order to avoid operating errors, his team decided to use a single preset that the editor cannot change or modify at the workplace. “This ensures that the metering is based on the same specifications at all our editing suites,” he notes. “On the other hand, there are other workplaces such as post-production suites or special-purpose systems where multiple presets are available to our creative team.”

Andreas Tweitmann, CEO of RTW, says his company is thrilled with the sale. “CBC’s acquisition of the 100 TouchMonitor TM3 units reaffirms the company’s faith in RTW’s loudness monitoring systems. We are very happy about that. We are convinced that the latest member of our extremely successful TouchMonitor series will meet and surpass all expectations in practical use.”

The RTW TouchMonitor TM3 enables quick and easy loudness metering. The system comprises a display unit featuring a 4.3-inch touch screen for horizontal or vertical use and a separate interface box. The easy-to-learn operating concept allows for fast selection of presets that are configured using RTW’s Devicer DC1 software, which is available for Macintosh and Windows. In addition to PPM and true-peak instruments, the TM3 offers comprehensive loudness metering in compliance with all globally relevant standards, including EBU R128, ITU BS.1770-2/1771, ATSC A/85 and ARIB. Instruments include single-channel and summing bar graphs, loudness range and numerical displays. The TM3 stereo version handles analog and digital audio; in addition, the TM3-6CH version also supports six-channel digital input. An upgrade option for stereo units is available.

About RTW
For more than 45 years, Cologne-based RTW has accompanied the steady technological progress in the professional audio industry with innovative instruments and technologies for visual audio monitoring in broadcast, production, post-production and quality control. Its state-of-the-art audio and loudness metering systems have an excellent reputation throughout the world. With ground-breaking products such as the Surround Sound Analyzer, the company has been a key vendor of professional broadcast and audio metering equipment for decades. 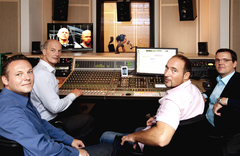