LAS VEGAS, APRIL 4, 2013 — RTW, a leading vendor of visual audio meters and monitoring devices for professional broadcast, production, post production and quality control, is exhibiting at NAB 2013 (Booth C1844) its TM3-3G TouchMonitor. The TM3-3G seamlessly allows the TM3’s current hardware and software design to visualize, convert and replay 3G SDI signals in TV and video production and post production applications, offering a feature set unrivalled in its class. Attendees will also have the chance to win one of three TM3-3G or TM3 units that RTW will be raffling off during the show. A winner will be chosen live at the booth at 5 p.m. local time, on Monday, April 8; Tuesday, April 9 and Wednesday, April 10. Participants are encouraged to be in attendance each day to win.

The TouchMonitor TM3-3G is a compact yet versatile solution for metering, de-embedding and monitoring 3G SDI audio. It features a 4.3-inch touch screen for horizontal as well as vertical orientation, which can display any of the eight audio channels contained in a 3G-SDI stream. For that purpose, it includes a large number of graphical and numerical instruments showing single-channel and summing loudness bargraphs, PPM, true peak, SPL, loudness range (LRA), dialnorm and correlation. The TM3 offers comprehensive loudness metering in compliance with all globally relevant standards (EBU R128, ITU BS.1770-2/1771, ATSC A/85 and ARIB). It also features the Magic LRA mode, specifically designed by RTW, for intuitive visualization of the loudness range and integrated-loudness parameters.

If equipped with the corresponding software license option, the integrated de-embedder also outputs up to 16 audio channels from the 3G-SDI signal on eight AES3 two-channel ports. The output signals are independent from the visualized audio. In addition, the TM3-3G can be upgraded with a built-in monitoring controller license. This uses an on-screen fader for output-volume adjustment, a stereo output and phones out. The optional timecode license expands the feature set of the TM3-3G to allow external or SDI timecode signals to be decoded, displayed and used for additional functions.

The intuitive operating concept of the TM3 allows for quick and easy selection of presets that can be configured using RTW’s Devicer DC1 software (available for Mac OS X® and Windows®). Using custom presets, the user can easily switch between the various sources, loudness standards and instrument layouts. The configuration software allows users to freely scale and place the required instruments virtually anywhere on the screen.

RTW’s ranges of products currently include the SurroundControl series for monitoring, controlling and routing stereo, multichannel and surround audio and the TouchMonitor range, which truly marks a paradigm shift in visual audio monitoring and loudness metering. Combining maximum flexibility and modularity with an intuitive touch-enabled surface and multichannel signal analysis, the TM7 and TM9 units are the essence of many years of experience. The attractively priced TouchMonitor TM3 entry-level system opens new markets, targeting applications such as journalist cubicles, edit suites and small control rooms.
As part of its expansion into the U.S. market, in 2013 RTW established RTW International Corp. in Lancaster, Pennsylvania. The new office is the first U.S. location launched by RTW, showing the company’s dedication to supporting its customers and dealer networks in the U.S. The new U.S. office will house all customer service, repair and final product assembly activities for U.S.-based RTW customers. 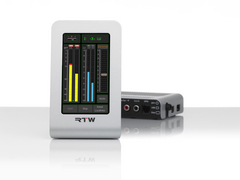