PORTLAND, MAINE, FEBRUARY 10, 2015 — When renowned mastering engineer and Gateway Mastering Studios, Inc. founder Bob Ludwig received his new Sound Performance Lab console, he was happily introduced to the unit’s OEM version of the TM9 audio meter from RTW, a leading vendor of visual audio meters and monitoring devices for professional broadcast, production, post production and quality control. Ludwig and his team are huge fans of the reliability and accuracy of the meter’s loudness measurements. So much so that they utilize it for all of their mastering projects for clients such as Daft Punk (the studio recently mastered the group’s Grammy-winning album, Random Access Memories), The Smashing Pumpkins, Jeff Tweedy, Bruce Springsteen, Robert Plant, Phish, Pharrell Williams and many other top industry artists and groups.

Founded 22 years ago, Gateway Mastering Studios is a worldwide leader in audio and DVD mastering. Its mastering rooms were conceptualized by world famous acoustician Dr. Peter D’Antonio. Gateway won a TEC Award for Outstanding Creative Achievement, Mastering Studio, the first year the company was eligible. With its expertise in balancing vintage analog sound and the latest innovations in digital technology, the team at Gateway found the TM9’s ability to measure 5.1 surround and stereo sound especially useful.

“We have the most recent OEM version of the TM9, packed with many of the latest updates, including the loudness configuration, which has certainly been an upgrade for us,” says Ludwig. “Having this configuration is very useful for mastering purposes. Before, every time I had to align a tape machine or check any phasing, I had to find an auxiliary scope, which was a drag. Having the TM9 loaded with all of the software necessary to tackle 5.1 and stereo has certainly streamlined our workflow.”

Ludwig has also been happy with the TM9’s correlation meter for surround sound, which shows whether the channels he is working in are in the correct correlation with each other and if there are any problems with phasing. “While other meters have that feature too, RTW’s TM9 makes it so visually obvious whether you are in proper alignment, correlation-wise, from any speaker, to any other speaker,” he says. “It will show you clearly if there is anything wrong. It’s very ingenious the way it’s designed, the entire TM9 is easy to read, it’s great.”

Ludwig went on to note that dating back to his initial work with CDs, playback loudness relied on peak normalization, meaning there was a full scale 0 dB (decibel) meter reading. “In this paradigm, the harder one slammed the peak levels, the louder your record was,” he explains. However, the popularity of music streaming services such as Apple® iTunes®, Pandora and Spotify, has made it more necessary to have loudness normalization, which the RTW TM9 provides to him, rather than peak normalization. “This paradigm shift means that every song included in a playlist is first analyzed with the computer, and a single value is given to its loudness. In the streaming playback of those streams, records that are very loud are brought down and records that are very soft are brought up, so we can achieve a more uniform listening experience. Compressors are no longer used in loudness normalization, it’s just a matter of rebalancing it all to a certain target level.” The loudness values from the TM9 can help make songs more consistent with each other.

“We are so happy to support such a mastering engineer as well-known and respected as Bob Ludwig,” say Andreas Tweitmann, CEO, RTW. “We take great pride in the quality and accuracy that the TM9 and the entire TouchMonitor family of audio meters provides to its users. RTW is constantly improving software to further enhance an engineer’s experience when monitoring loudness. We are honored to know that our product is being used to remaster some of the top musical work being produced today, across many genres.”

The OEM version of RTW’s TM9 audio meter is part of the company’s premium product segment, which includes the entire range of the company’s flexible and scalable TouchMonitors. The TM9 features a seven- and nine-inch touch-sensitive display and pairs unparalleled flexibility and modularity with intuitive control. The software visualizes multiple sources simultaneously and supports displaying the same signal on multiple instruments in parallel with dedicated defaults for both horizontal and vertical operation. All of RTW’s metering solutions conform to the EBU R128 loudness standard, as well as ITU-R BS.1770-3/1771-1, ATSC A/85, ARIB, OP-59, AGCOM, SPL mode and the U.S. Calm Act regulations.

About RTW
RTW, based in Cologne (Germany), has nearly 50 years of experience in designing, producing, and marketing advanced recording-studio equipment, leading and innovating the market for high quality audio metering and monitoring tools. RTW operates a worldwide distribution and service network. For more information on RTW, visit www.rtw.com, www.facebook.com/rtw.de or call +49 221 709130. 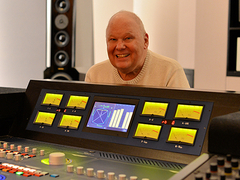